Last weekend, I moved my daughter into her new apartment out in Landenburg, PA.  Where is Landenburg?  She lives less than a quarter mile from Delaware, in that rounded little southeast corner of Pennsylvania.  It is 5 hours away from Pittsburgh and NO, she doesn’t have a job to support herself yet, so the costs are all on us.  My husband has given her 6 months to get on her feet and find a job or he threatens to move her back home.  (He misses her terribly and texts her silly cat and dog pictures 10 times a day from what I can tell).

So the house has been in upheaval.  Somehow, with Katie moving out, everything in the house has been shifted or moved or is being re-evaluated.  Even my husband’s and my roles are changing.  Even with one child still at home, things are just… different.

There are bags of clothing in the hallway, containing items that she decided to give to Good Will rather than take with her.  I haven’t yet taken the bags there yet, in the misguided belief that I will go through my own clothing soon also.  An abandoned fan and printer sit on the front porch that I also need to get rid of, since her apartment is air conditioned and they have no space for a printer because the apartment is so small.  And her bedroom doorway stands strangely open into a stark space without the usual mayhem of laundry baskets and journaling supplies laying everywhere.

The dining room is also in upheaval.  I’m in the midst of working on my rug for the exhibit, and the dining room is where I usually work on rugs, so that means no sit-down family dinners.  Instead, we eat in the living room in front of the TV or a laptop, catching up on episodes of “Timeless” (a favorite time-travel show) or watching bad 1950’s-60’s sci-fi.  We used to watch PBS News over dinner, but the current machinations of politicians have enraged me so much that I just refuse to watch it.  Yes, I know that’s a cop out, but I don’t feel empowered to change anything presently, so stamping around the house yelling angrily about politics furthers nothing.  I will resume watching the news in October, when the November voting opportunity looms, and until then I want peace in my house, and in my own mind.

The exhibit rug has grown, and grown, and I am way past all ideas of fitting into the size requirements. As a co-curator, I decided that I had some leeway, but this is getting ridiculous.

I have changed my name from “Procrastination Princess” to “Queen of Fill-Ins.”  I think that’s an improvement. 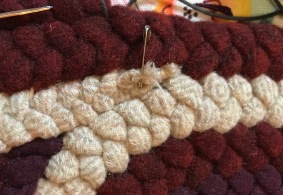 The back of a taper, with frayed ends sticking out.

One good thing:  I have always been unhappy with long skinny tapered ends.  The ends always seem to fray and either create lumpy loops in the row below where the ends are buried, or if I try to keep them out of the row below… just don’t look good.  Here is an example of a taper that I am NOT happy with, left.  It is held in place with a pin because it doesn’t lay right without the pin — I’ll have to re-work this.  Not happy with it at all.

The front of a new taper, reduced down to one strand that doubles back on itself to rejoin the original braid.

I have now figured out how to drop from three strands down to one, twist it around itself in a “twisted center,” and rejoin the 3-strand braid.  It makes a MUCH better-looking long skinny taper.  So that’s at least one good thing that has come all of my sitting and braiding.

Another thing that I’ve enjoyed is the process of figuring out how to place triangles around an oval to make it into a rectangle.  First, there are two different triangles that are mirror-image of each other:  2 pink, and 2 blue.

But, I couldn’t make simple triangles for my rug…  I had to put spirals inside them.  And, since the “oval” isn’t just an oval, I traced the outside edge of the corner of a rug onto a large piece of foam core board, then sketched how I wanted to fill it in. 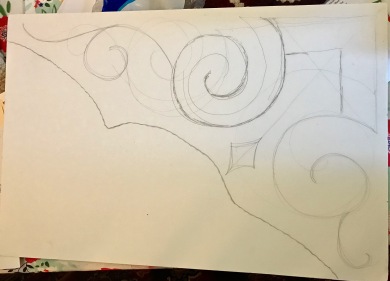 The lower left is my tracing of the outline of a corner of the rug’s center.  The upper right is a rough idea of my design for the corner, drawn onto a piece of foam core board.

For awhile I was stymied as to how I was going to get a mirror-image of this design without spending a lot of money at a copy center (to get a large photocopy made and then trace the design on the back).  But after making the first corner, I realized it was easy:  I just turned the braided corner onto its back, and there was my mirror image all ready for me.

So, while I am probably going to be braiding up until the last week before the exhibit, I am learning some cool stuff along the way that I will find useful in the future.

Eventually, I will even be able to have a family dinner at the dining room table again.  I’m hoping to change my name back to just Christine again, once this nightmare of a rug is completed.