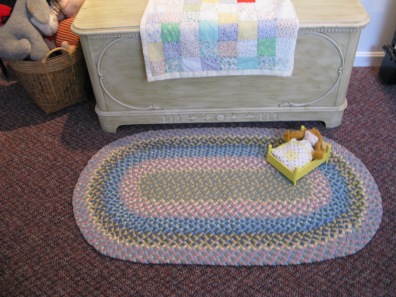 My friend Jenn Kiarsis sent me some photos of two baby rugs she braided for a friend of hers when the friend’s first grandchild was born. Aren’t they adorable?

I am – intermittently – working on my own “baby rug”… although I put that in quotes because, as often happens, my rugs tend to wander a bit from their original intentions. I have completed 3 of the 6 braided square spirals, but now I’m liking it enough that maybe I want to make something a bit bigger? Maybe a hall runner? I like the idea of braiding these smaller pieces and putting them together to make a bigger rug. And, as usual, I am leaning toward bright turquoises and greens and less toward baby blue, so it’s becoming less of a baby rug, and more of just a rug.

The only problem with the square spirals is that they seem to take forever to lace. I’m sure it’s not that the shape has any extra lacing to do, though… it’s just that right now my life is an endless stream of being interrupted, again and again, and again, by workmen. There are incessant questions and adjustments and additional invoices and unexpected quirks to my house that require alterations to plans. The kitchen is nowhere near being finished: still no sink, no countertop, and only half the cabinets are in. The refrigerator and non-working stove are still in the dining room with the microwave.

People have told me to just take the long view: in another month or so (probably the “or so” is more accurate) I will have a nice new kitchen and everything will be in its place.

It’s just really difficult to even be happy about that future, though. Right now I am detesting the whole process so keenly that I kind of long for the days when I had my old kitchen: I’m nostalgic even for the ceiling with the hole in it that plinked bits of plaster down on me when I was washing dishes at the sink. At least the place was my own, and had not yet been invaded by all of these men in dusty boots parading through my house, demanding my decisions and my compromises, and yet another check for additional expenses.

The continual disruption has made it difficult to focus on any one thing, and difficult to settle down and braid, or even to write.  In the midst of writing this one page, I have:  gotten the kitchen guys to plug an extension cord in for the back porch cement guys, been called out to view the siding and approve something weird about where the kitchen bump-out joins the house, and decided to have a strange piece of plumbing in the kitchen ceiling boxed in rather than having the beam slant outward to cover it.  (Have you ever seen a straight beam that then slants?) All three things were separate questions and separate interruptions… which shows you why I can’t keep a coherent thought in my head these days.

In fact, the one thing that does stay in my mind is something that I don’t want:  that Snow White song:  “Some day my prince will come, some day we’ll meet again, and away to his castle we’ll go, to be happy forever I know…”  Now why would I have that bit of nonsense stuck in my head?