Christine here:  Due to some camera or perhaps camera-cord difficulties, I also (along with Dianne) have had difficulty posting recently.  But, I have figured out a work-around that involves removing the memory card and inserting it into the one desktop computer that can recognize it, then copying it to a flash drive and importing the photos to my laptop.  Excessively complicated but at least it works now!!

Here is the completed curved strip rug that I was complaining about so much: 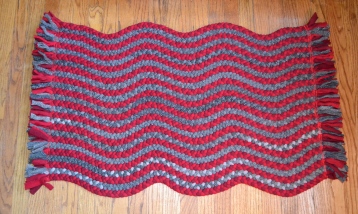 The curves were completed by making a series of increases and decreases.  After multiple attempts at deeper curves, I realized that the most I could put into the rug (and still keep the braids perfectly parallel) was 1 increase or decrease per curve in the red braid and 2 increases or decreases per curve in the gray braid.  Any more increases/decreases than that, and I lost the parallel aspect and they had to become expanding and shrinking curves, if that makes sense.

2 rows of zig zag across each end.

I was able to finish the rug on my home machine (Husqvarna Viking “Quilter” edition) with a new pack of jeans-weight sewing needles.   I did 2 rows of fairly tight zigzag stitch across each end.  I went through 4 needles.  So it’s not a perfect technique… but easier than sending it off in the mail (Pam Rowan will finish these strip rugs on her industrial sewing machine if you send them to her:  prowan@metrocast.net).

My next project was going to be a super-curvy rug but… before I could get to it, I got distracted by yet another idea.  I’ve been preparing for teaching at ATHA in San Antonio with Kris McDermet and Dianne Tobias, where the 3 of us are going to teach sections of
Attaching Braids to Hooking (or whatever the actual title is, something like that).  I had so enjoyed my Cornered strip rug  that I did earlier (still haven’t finished the ends, truth be told) that I decided to work on a cornered rug around hooked centers.  I have spent the last 5 days rug-punching 5 eight-inch squares for this rug.  I’m working on finishing the padding and backing now.  Here are 3:

3 of the 5 rug-punched squares for my runner

And here’s a view of the side, where a little of the hooking foundation is visible so that you can lace the future braids to it:

I am sick to death of rug punching, but at least they’re completed and now I can begin the braiding portion.  Here’s what I have in mind for the squares:

I plan on putting several rows of braid around the squares and spent all day yesterday dyeing yards of pinky-purple fabric… which turned out too dark initially, darn it, so I tried again with less dye and it still came out darker than I wanted… that magenta is really powerful stuff, isn’t it?  Anyway, after torturing myself with all the rug punching, all I want to do is braid.

Final comment:  I was reading an essay on Robert Southey, a poet from the early 1800’s who was fond of creating new words:  an example is “autobiography.”  One of his 400 created words was agathokakological (composed of both good and evil).  He apparently planned a literary utopia withe Samuel Taylor Coleridge on the banks of the Susquehanna River in my home state of Pennsylvania, but they couldn’t ever agree on the location so the plans fell apart.  (Probably for the best:  few of those 19th century utopian societies lasted).  Anyway, reading about him inspired my own neologism:  pathoplekophilia:  a pathological love of rug braiding.